You might not have heard of Bling, but if you’ve been using money-making apps for a while, you’ve probably played one of their games.

Bling produces mobile games for iOS & Android and is one of the best (and legitimate) providers of Bitcoin rewards out there.

Starting with just one game, they now have six and are ever-increasing their catalog.

How much are my Bling Points worth?

The amount of Bling Points you’re awarded actually fluctuates depending on the real USD value of Bitcoin at any given time.

This is why it’s so difficult to find out exactly how much your Bling points equate to in real currency.

Bling Points are awarded whether you win or lose the game, and the amount is not based on game performance, chance or skill.

Bling Points can be converted into Bitcoin and cashed out to your Coinbase account at anytime.

That’s it! Your Bitcoin will be with you within 24-48 hours!

In the top right-hand corner of any Bling game, you’ll see a party blower icon with a couple of numbers next to it (e.g. 15/15).

This is the number of rounds you can play until you’re not allowed to earn any more Bling Points on that game.

Once your Party Power runs out, you’ll need to wait until it refills over a countdown period and you can play again. 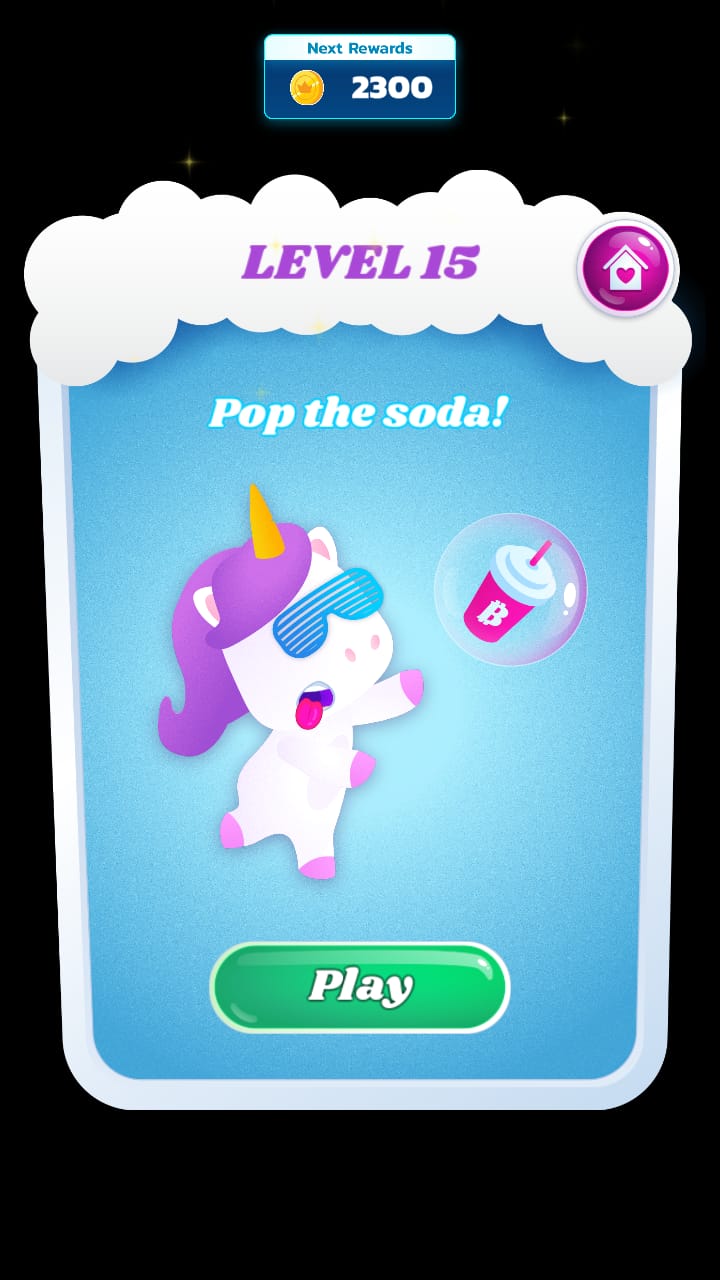 Bitcoin Pop is a bubble-shooter-style game available only on Android.

This is a very niche reference but my first introduction to a game like this was a version made for the early-2000s Saturday morning CBBC show Smile.

It was called Nev’s Jam Buster and the aim was simple – shoot colored pies at other pies of the same color before they reach the bottom of the board.

The same is the case with Bitcoin Pop. But you win Bitcoin!

Bling’s latest game brings us “Sugar Bae”, a dodgy-looking sheep-type thing that looks down upon the board as you play his mighty Candy Crush rip-off.

That thing is demonic.

Anyway, if you love a bit of Candy Crush, you’ll pretty much know the rules from the start.

Unless you’re like me and could never really work out the scoring system on Candy Crush.

The Snoop Dogg motherfunkin’ OG of this list – Bitcoin Blast.

Available on both Android and iOS devices, Bitcoin Blast is another classic match-three style game from Bling.

In my opinion, Bitcoin Blast isn’t as visually appealing as Sweet Bitcoin.

But as least you don’t have to look at that sheep.

This is a different kind of game and requires a considerable amount of skill to reach higher levels.

The aim of the game is to fire kitchen utensils at a big piece of food as it spins around.

But hit any of your utensils that are still sticking out of it, and you lose.

Sounds stupid but it is quite fun.

Alright, you’ve probably worked out by now that Bling has a penchant for match-three games so here’s another one.

Bitcoin Blocks is pretty much the same as both Bitcoin Blast and Sweet Bitcoin.

Instead of swiping all over your screen though, you tap the blocks.

Bitcoin Solitaire is Bling and PlayDay Studios’ take on the classic card game.

It’s Solitaire like no other. You actually win free Bitcoin!

Free Bitcoin Cash – Exactly What It Says On The Tin

Mine Bitcoin Simply With Honeyminer

We use cookies on our website to give you the most relevant experience by remembering your preferences and repeat visits. By clicking “Accept”, you consent to the use of ALL the cookies.
Do not sell my personal information.
Cookie SettingsAccept
Manage consent

This website uses cookies to improve your experience while you navigate through the website. Out of these, the cookies that are categorized as necessary are stored on your browser as they are essential for the working of basic functionalities of the website. We also use third-party cookies that help us analyze and understand how you use this website. These cookies will be stored in your browser only with your consent. You also have the option to opt-out of these cookies. But opting out of some of these cookies may affect your browsing experience.
Necessary Always Enabled
Necessary cookies are absolutely essential for the website to function properly. This category only includes cookies that ensures basic functionalities and security features of the website. These cookies do not store any personal information.
Non-necessary
Any cookies that may not be particularly necessary for the website to function and is used specifically to collect user personal data via analytics, ads, other embedded contents are termed as non-necessary cookies. It is mandatory to procure user consent prior to running these cookies on your website.
SAVE & ACCEPT
wpDiscuz
1
0
Let us know what you think!x
()
x
| Reply
%d bloggers like this: